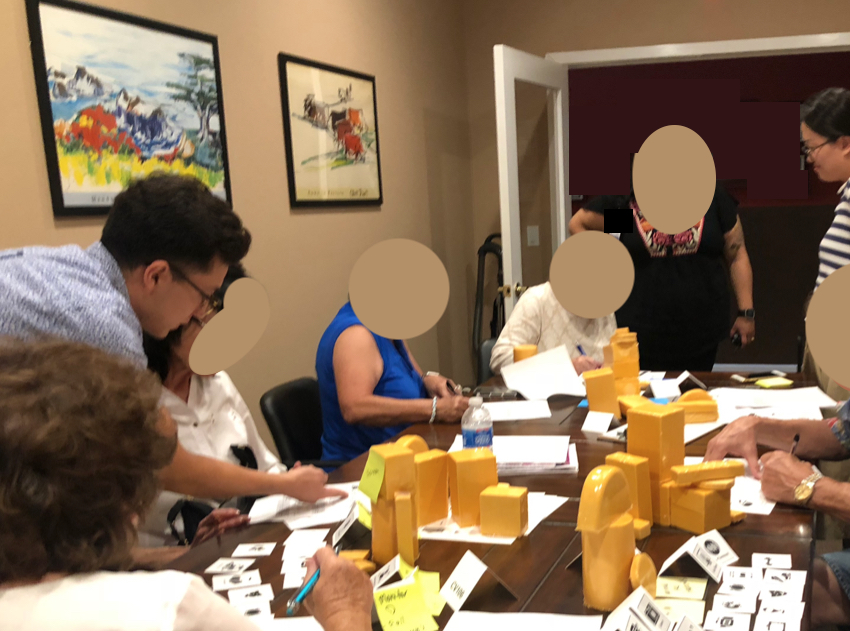 Many new technologies are being built to support people with dementia. However, they largely focus on the people with dementia; consequently, informal caregivers, one of the most important stakeholders in dementia care, remain invisible within the technology design space. In this paper, we present a six- month long, community-based design research process where we collaborated with dementia caregiver support groups to design robots for dementia caregiving. The contributions of this paper are threefold. First, we broaden the context of dementia robot design to give a more prominent role to informal family care- givers in the co-design process. Second, we provide new design guidelines that contextualize robots within the family caregiving paradigm, which suggest new roles and behaviors of robots. These include lessening emotional labor by communicating information caregivees do not want to hear (e.g., regarding diet or medication) or providing redirection during emotionally difficult times, as well as facilitating positive shared moments. Third, our work found connections between certain robot attributes and their relationship to the stage of dementia a caregivee is experiencing. For example, caregivers wanted their robots to facilitate inter- action with their caregivees in early stages of dementia, yet be in the background. However, for later stages of dementia, they wanted robots to replace caregiver-caregivee interaction to lessen their emotional burden, and be foregrounded. These connections provide important insights in to how we think about adaptability and long-term interaction in HRI. We hope our work provides new avenues for HRI researchers to studying robots for dementia caregivers by engaging in community-based design.